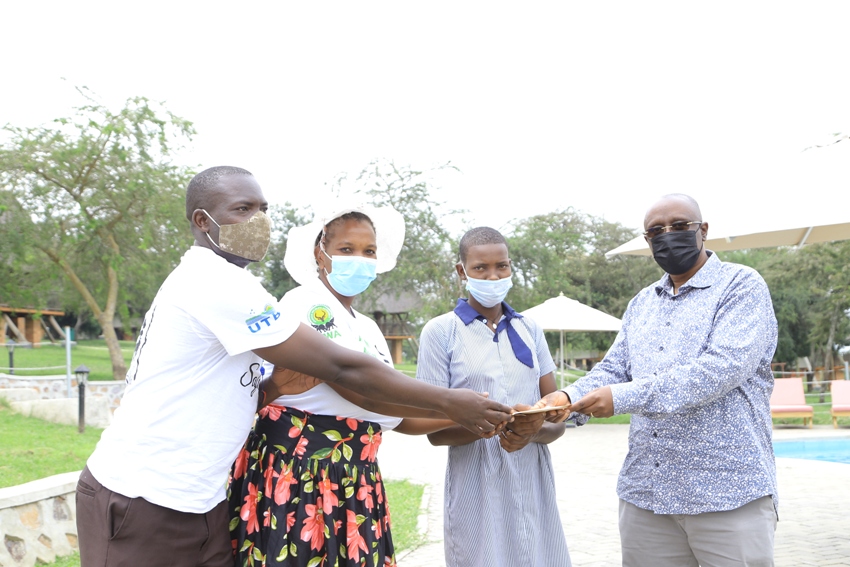 “You have lifted a heavy burden from our shoulders. My family has enough problems, and I did not know how I would go through school this term,” said 20-year-old Margret Caroline, a student of Mwizi Secondary School in Rwampara on receiving her full annual school fees from the director of Kigambira Safari Lodge in Lake Mburo National Game Park in Kiruhura district.

On Saturday, Kigambira Safari Lodge fulfilled its pledge to pay school fees for four athlete girls from Rwampara, Kiruhura and Wakiso districts who emerged victorious at the marathon organized mid-January to promote conservation.

Up to Ugx4,285,000 was shared between the four girls; Loyapus Maximillah from Sanga town council in Kiruhura district, Evas Nasasira from Wakiso district, as well as Margret Caroline and Orikiriza Assumpta from Rwampara District, who participated and emerged winners in their respective races.
Kigambira Safari Lodge, a high-end luxury accommodation found in Lake Mburo National Park has set itself apart for its world-class hospitality services and impactful community outreach programmes, which is part of its Corporate Social Responsibility.

At the successful marathon on January 15, 2022, dubbed Kigambira Marathon Run in Wild’, Kigambira Safari Lodge proprietor Brig Charles Bakahumura promised to pay this year’s school fees for the four girls who competed with the boys in the race and emerged winners.
“In addition to conservation, we are helping these girl children because they were severely affected by effects of Covid-19,” Brig Bakahumura said.

The UPDF officer tweeted via his handle @BakahumuraChar1; “Yesterday Kigambira Safari Lodge fulfilled its pledge of paying school fees of this year for 4 athlete girls from Rwampara, Kiruhura and Wakiso Districts who emerged victorious which was organized by the lodge two weeks ago to promote conservation and tourism around Lake Mburo.”

The girls who won the 10km were Evas Nansasira (winner), Margret Caroline (First Runner Up), Orikiriza Assumpta (Second Runner up).

Assumpta a senior four student at Rwinyaga Senior School in Rwampara district said she was humbled that the pledge came very soon at the beginning of the term and she has no worries for the year long. She said she can now concentrate on her books and running. Margaret in her Senior Five Class at Mwizi SS said she didn’t know her talent to run could earn her school fees for a full year.

18-year-old Loyapus Maximillah, a Primary Seven pupil of Parental Care Primary Sanga, in Kiruhura district was the overall best girl in the 5km race. Her mother, Lynet Loayapus, a former councillor in Sanga Town Council said, Kigambira Safari Lodge has lifted up their hopes in Sanga as well as their commitment to protect Lake Mburo National Park as a community resource.
“We are going to be ambassadors for Lake Mburo National Park because it is making a difference in our lives. We are from today ambassadors for Kigambira Safari Lodge in our community.” Sanga is one of the entrances to Lake Mburo national park.

While handing over the school fees packages, Mrs Karungi Bakahumura, the director of Kigambira Safari Lodge said she was glad to impact the lives of the girl child. She saluted their talent and challenged the girls to continue their education while developing their talent in athletics.

Mrs Bakahumura said, “We know very well that education of the girl child is one the best ways to promote conservation, cause development in communities and mitigate climate change.” She added, “Educating women influences negative cultural negative because they will teach their children to respect nature.”

Kigambira Marathon which was graced by world marathon champion Joshua Cheptegei was organised by Kigambira Safari Lodge in partnership with Uganda Wildlife Authority (UWA) and Uganda Tourism Board (UTB) with the objective of promoting conservation, tourism and sustainable development of communities around Lake Mburo National Game Park.

Kigambira Safari Lodge a high-end luxury accommodation in Lake Mburo National Park is located 37km from Mbarara city, the biggest urban centre in Western Uganda. The hotel with single and family rooms with a terrace, features a restaurant, outdoor swimming pool, a bar and garden in Bakijurura and offers a 24-hour front desk and room service.

Lake Mburo National Park is the smallest of the 10 national parks in the country. But what the 370 square kilometre park lacks in size, it makes up with its rich variety of plants and animals such as the eland, impala, buffaloes, hippos, warthogs, giraffes and klipspringers. It is believed to be home to the highest concentration of leopards and is also home to the largest population of zebras in Uganda.

For Information about Kigambira Safari Lodge: